How To Build A Holodeck 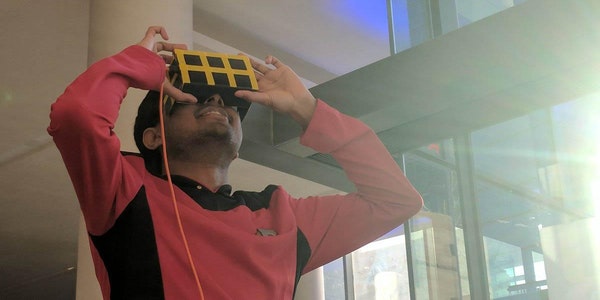 Skyera, Sneak Peak at a Work in Progress
Matt Meuwissen

Matt Meuwissen is developing a game with an intriguing mechanic and we’ve convinced him to tell us about it. Skyera is a work-in-progress game where the player can explore a bizarre world in amazing ships, obliterate enemies, loot treasure, and raise pets. In Skyera, the animals have adapted to the chaos and can morph into powerful ships and weapons that the player can use. With live game play, Matt will talk briefly about the game and its development so far, the inspiration and mechanics, as well as challenges and implementation using Unity 5.0. Matt is looking for feedback and suggestions from the audience to help improve the game. (Matt’s website.)

How to build a Holodeck: A Star Trek VR postmortem
Mark LaCroix

For its Summer 2017 “Star Trek Live” event, the Minnesota Orchestra asked GLITCH (http://glitch.mn) to come up with a Trek-themed lobby installation, and GLITCH asked game developer and noted Trekkie Mark LaCroix (http://noblerobot.com) to create it.

In his presentation, Mark will talk about designing a VR installation space for a non-gamer audience, and walk though his method for “impersonating” high-end 3D content for Google Cardboard by using photospheres in Unity. He’ll also talk about the dead ends, false starts, and various “trials and Tribble-ations” he faced along the way.

Mark LaCroix is a filmmaker, game developer, and co-host of the weekly gamedev podcast Nice Games Club (http://nicegames.club). His video work has appeared on NBC and Netflix, while his Javascript advertising template is probably cached on your computer right now (sorry). Mark lives in Minneapolis with his wife and three computers.

6:00 Pizza and drinks (thanks to the Nerdery!) and socialize.
6:30 Meeting starts. Announcements and Plug My Thing!
6:45 Member Project
7:30 Main Presentation

We’ll be heading to Joe Sensers in Bloomington after the event. Come socialize with other local developers.

Many, many thanks to The Nerdery for hosting the IGDA Twin Cities events over the years.

This event is open to the public. An IGDA Membership not required.