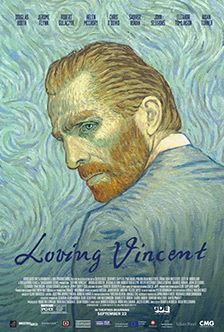 Loving Vincent, the world’s first fully oil painted feature film, brings the artwork of Vincent van Gogh to vibrant life in an exploration of the complicated life and controversial death of one of history’s most celebrated artists. More than six years in the making with the help of 125 specially trained painters, Loving Vincent is a uniquely animated film composed of 65,000 painted frames. Drawn from meticulous research and inspired by van Gogh’s masterpieces, subjects, and 800 personal letters, the film captures the world of van Gogh in a cinematic experience like no other. The story begins a year after van Gogh’s death, when Armand Roulin (voice of Douglas Booth), the postmaster’s son, is tasked with delivering Vincent’s last letter, and ends up interviewing all those who knew him in his troubled last days, trying to understand Vincent’s character and what happened. With the voice talent of Saoirse Ronan, Chris O’Dowd, Aidan Turner, Eleanor Tomlinson, Jerome Flynn and Robert Gulaczyk.