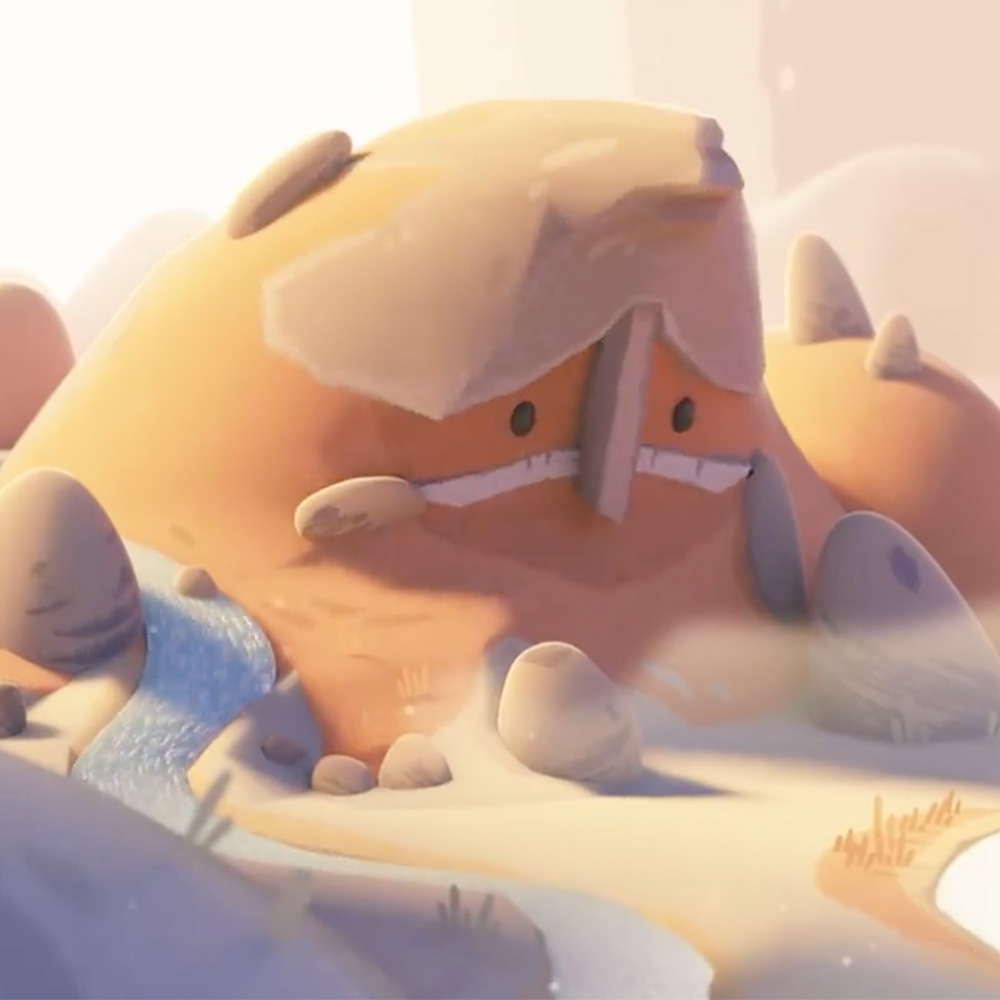 Scrolling through the Nice Moves facebook group, Lonely Mountain immediately jumped out at us. Short, sweet, and with a level of polish that belies professional experience. We spoke with its creator, Ringling student Chris Beausire, about his inspiration, his process, and the supportive team at NEIGHBOR.

Lonely Mountain is not the only stunning piece to emerge from NEIGHBOR’s summer internship program. You can see them on NEIGHBOR’s facebook page.

Can you tell us a bit about your internship at NEIGHBOR? There were three other interns there with you, is that right?

I actually heard about NEIGHBOR through one of my classmates, she was also an intern with me. She told me about NEIGHBOR, what they do there, and the office culture. The idea of a smaller studio really appeals to me. There were four interns and I think eight full time employees. General day to day, it was great; surpassed what I thought an office/studio environment could really be. When they put us on client projects, they were thoughtful because they knew our strengths and weaknesses and interests and so they kind of suggested places where we could help out and do some work.

How did Lonely Mountain fit into the workflow?

That was an internal piece. In the off time of client work, they had us developing these internal projects and going through the entire production process on our own. But also with feedback from the team.

My inspiration was a vacation I had taken earlier in the summer. I’m not a believer in closing yourself in a room and coming up with ideas, so I wanted to pull from my own experiences and travels. I’m very lucky to have family in New Zealand. 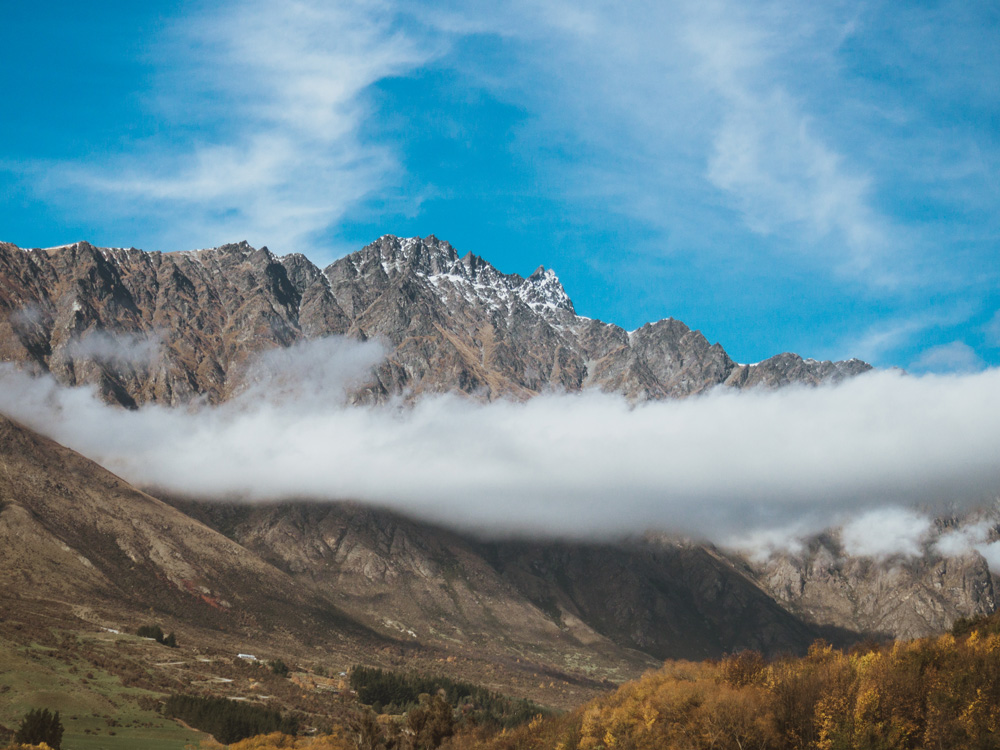 That’s amazing. How long were you there for?

I was there for three weeks. Previous times that I had been, I only go to North Island which is a little more beaches, sand, some retirees and vacationers. But this time, we went to the South Island as well. That’s a lot more mountainous, wild. When I was there I was taking a lot of photos of the mountains. The mountains kind of had these clouds that would drift past them and then curl around them and hug them. So I was like, “This is perfect to be characterized.” 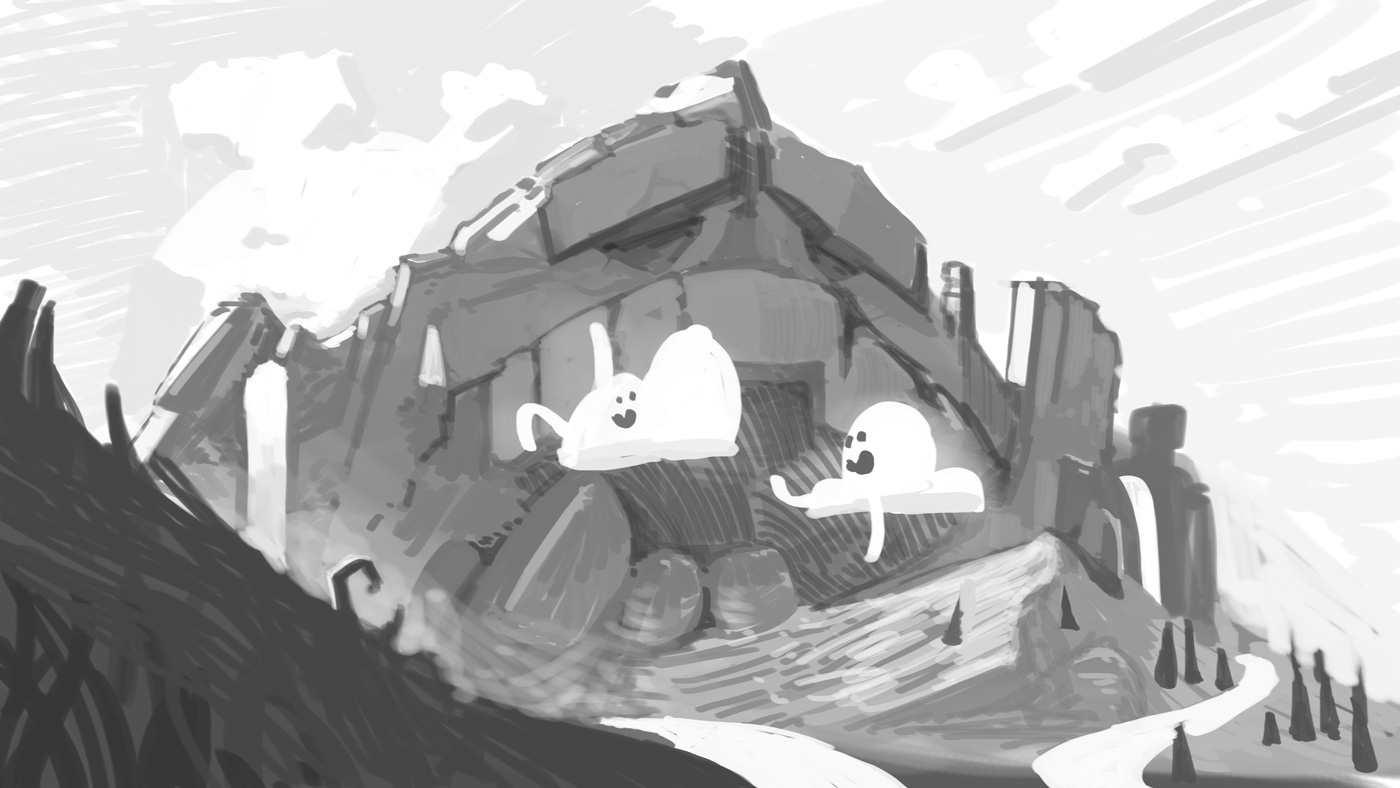 Did you build the project in Maya? Were you using V-Ray? Basically, what kind of software did you use?

I actually modeled the mountain, at first, in Blender. I had previously designed a different mountain character. It was very different, kinda rugged more blocky. I spent a lot of time in ZBrush perfecting the crags and all that. I just didn’t like it. It looked too aggressive at the end of it. For the sake of the story, even if the mountains are imposing in real life, I wanted this mountain to seem—well he’s in a moment of weakness—so I didn’t want him to feel so strong. So one night, back in my apartment, I didn’t have Maya—also I just kind of find Blender’s modeling a little bit faster for some things. 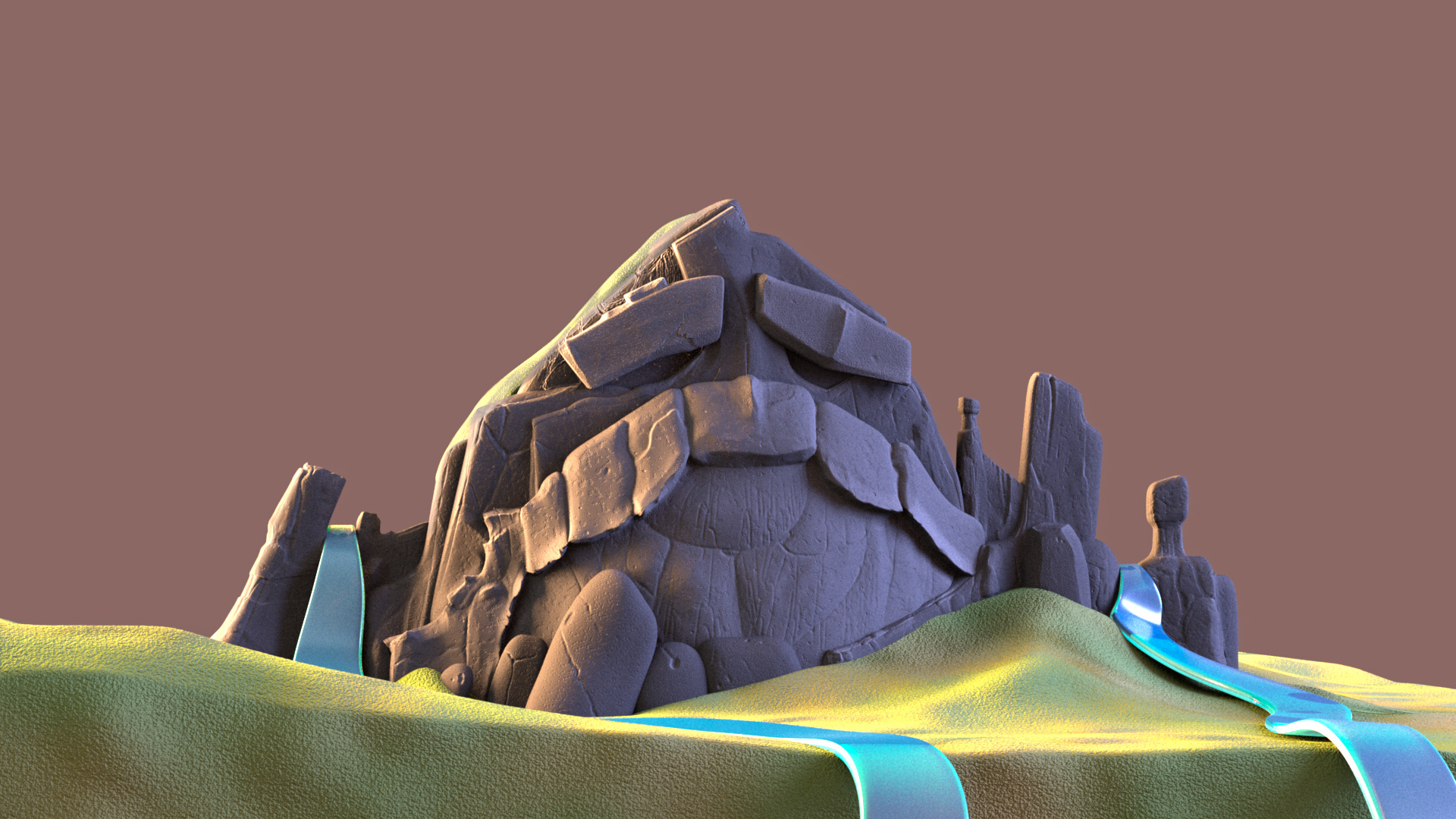 There’s some tools in Blender that seem like they should exist in Maya.

I started on it. I’m really comfortable in it even though I’m pretty comfortable in Maya now. I made that mountain in one night, tweaked it a bit in Maya the next day. UV’ed it. Got it all ready for animation and rigging. Did the rigging for everything in Maya. Did the texturing in Photoshop. We did the rendering with V-Ray. That was new for me.

How would you compare Cycles in Blender to V-Ray?

They’re similar in some ways. I have more of a knowledge of Cycles just because I’ve used it more. What surprised me about V-Ray was the separation of all of the aspects of how light interacts with everything. One thing that particularly stuck out to me was the separation of global illumination from the rest of the ray tracing. Because, in my mind with Cycles, global illumination comes with the bouncing of light. It’s just a given, you get global illumination no matter what you do because it’s physically based rendering. But in V-Ray you have much finer control of the way that everything works. I think that’s powerful but at the end of the day Cycles is also faster.

Were there any other surprises in the production of Lonely Mountain?

I had some problems with the clouds and their material, or lack of materials. They’re actually volumetric fog at a high density. That is all very fun for how they look in the immediate render view. The only issue is when you push it out into different passes. If you want to use the Z pass, it gets a bit dicey with fog because fog is one of those things that’s supposed to be in the background, I guess. Render engines have difficulty determining the depth of something that has no surface, so it pushes it completely to the back and it’s completely black in a Z pass. This happens in Cycles too. I had to then do another pass, I think it was called volumetrics. That gave me just the clouds and I could overlay that in After Effects in compositing.

The other largest issue I encountered was the mountain’s river arms. That was one of the things that I thought was going to be, not easy, but straightforward. Just because they’re basically two pieces of laffy taffy, you can rig bones up them, do whatever you want. So what’s the issue going to be? The first time I tried to rig them, I put too many joints and I would get the lift part, but it got really hard once I had to swing it back around and get that smooth motion. Each joint had to be tweaked independently. If you tweak a joint up here, the whole thing swings like way out because they’re really long too. That ended being really shaky because there were so many joints in there. Vlad got me more onto the rapid rig route. I put in all the regular arm joints and I used smoothing between them so I guess the advantage of that is that it was much simpler to animate. The disadvantage was that it was harder to control clipping because there weren’t as many joints to bend around each other. In that last part of the shot, there was a lot that was warped out to whack. If the arms really were where the CTLs were, it would look very very different. But I knew that the animation was ending there and I wouldn’t have to get out of that pose. I was fortunate enough to be able to break it and not worry.

Just one last question for you, do you have any plans to come back to Minnesota once you’ve graduated?

Minnesota seems like a nice place to be and I had no idea there were so many studios there. I got lots of love for the NEIGHBOR team, what they’re doing, and the whole office culture there. It’s so great. They made me feel so at home. It really helped me enjoy my time in Minneapolis and my first internship. It was a great success!