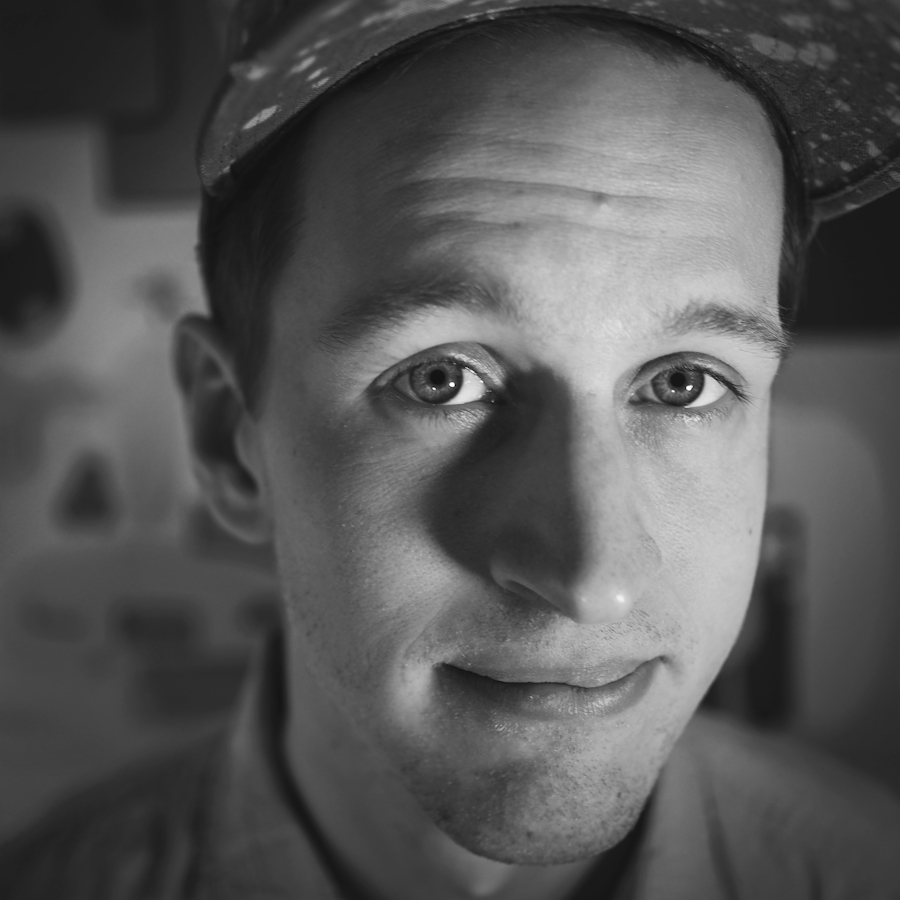 Getting Started in Stop Motion with Adam Loomis

Adam Loomis, recent grant recipient for his stop motion armatures, talks about his process and his love for independent animation.

You’ve been working with stop motion armatures. Can you tell us how you got into that?

I’ve been doing animation for about five years and I’m self-taught. I started with 2D animation in Photoshop, but drawing on a tablet didn’t really feel great. Seeing things move was awesome but I wasn’t getting the kind of tangible experience that I want out of making things. As I was starting to feel more comfortable with the principles of animation and movement, I decided to take those skills and other skills that I had learned in college and mix them together—stop motion made the most sense.

What stops a lot of people from getting into stop motion is that it seems scary and difficult.  But that didn’t stop you. Why is that?

I didn’t find it scary. I found it interesting. I had checked out the ParaNorman art book from the library and just paged through that: looking at all the materials they use and all the different people who build objects and build the world. I thought that was really interesting. So it was scary, because of the scale that studios like Laika work on—but I was also seeing shorter works that made stop-motion appear more feasible.

Animation already takes up so much time. But you’re adding this extra hurdle of trying to do a form of animation that you’ve never done before and even building it all yourself from scratch. That shows a great amount of patience.

You were awarded a grant for this. How did that come about?

I was awarded the Minnesota State Arts Board Artist Initiative grant. They have several categories in which you can apply; I applied in the media arts category. I had applied for the same grant multiple years in a row, and this was the first year that I’ve gotten the grant. I think nine or ten other artists each got roughly ten-thousand dollar grants.

Each time I applied for the grant, it was for a different project idea. This time, I essentially proposed doing a year of research towards expanding my practice into stop motion animation. It’s very validating to receive that kind of cash just to research something. A lot of people think that you have to make a film with that money. It really just depends on what you pitch.

How did you go from research to actually machining your own armatures?

Well if you go onto YouTube, you can find a few people making wire armatures, and even fewer people making ball and socket armatures, which are much more difficult to make. Some people are able to do it with a drill press. I was inspired by those videos and I was like, “Oh it’s going to be super easy!” The more research I did, I found that I would I need to use more sophisticated tools. Tom Brierton published a series of three books that are all about making and animating puppets for stop motion animation, and the edition about armature machining informed my whole approach.

Once I learned that it would be best if I got more sophisticated tools, I sought out help from local machinists. There’s a faculty member at MCTC in the machining department who met with me, gave me a machining textbook and referred me to one of his students who was into smaller pet projects.

When you’re telling me that you have to learn machining in order to do stop motion: again, it’s very intimidating.

I’ve used the grant to learn about ball and socket armatures, and what I’ve learned is that they are so unnecessary for most productions. Learning this skill will hopefully lead to work with studios dedicated to stop-motion. It would be awesome to get hired by Laika or somewhere that needs ball and socket armatures. Typically, those places are going to be feature film studios—I’ve always wanted to work on feature films. But it’s also really cool that I now have these armatures and I can use them however I want to. I could make a hundred short films with one of the armatures that I’ve made and it’ll probably never break. And if it does, I have the tools to fix it.

Currently, you’re focused on construction. Is this the goal, or is animating a short film at the end of the road?

The goal of my grant proposal was just to learn how to make armatures, but my intention was that it would lead to making short films after the grant period ended. I chose to study armatures because—other than the animator—they’re the most important thing in determining what a character can do. To me, character is the most generative element of a story. So, It was important that the start of my relationship with stop motion animation be with the character.

It’s not just lines on an iPad anymore. You literally know the character inside and out.

Yeah… which, I mean, another appealing aspect to using stop motion armatures is that you can’t go off model. You make the armature, and then it’s just there. That actually makes stop motion seem a lot easier than 2D animation to me.

Can you talk about this armature?

This armature is about ninety-five percent complete. It just needs a head and forearms; the hands will be made of wire because I haven’t figured out how to make metal joints that small yet. The feet are probably the one thing on here that I will really try to greatly improve for next time. The type of screw dictates the joint movement. These are threaded all the way through, but they should have a smooth part where one part of the hinge can smoothly rotate and the other part of the hinge stays rigid.

Are the screws the only thing you’re not making on this?

Correct. All of the other pieces are machined from raw metals. Those brass plates come in a three-foot length of brass, and I have to cut each one. The balls sit in little seats that are milled out with a special bit; it’s called a ball-end mill. The aluminum with the balls on the end are aluminum rods that I had to use a special tool on a lathe to cut. The lathe turns the workpiece which I then push a blade against to shape a ball. Besides the lathe, I also use a milling machine which is like a drill press, but instead of just the spindle going up and down, you can also move your workpiece in an X and Y axis against the cutting tool.

What was the hardest part to build on here?

I think just getting consistent with the brass plates. I would like to work with smaller metal stock, but in order to work smaller, I would need to use a stronger metal—steel. The machines that I have are small and not quite rigid enough to handle steel well. Also, each metal has a different cutting speed, and if you want to work most efficiently, you have to calculate the right speed you have to spin at depending on which metal you’re cutting.

Do you have any advice for someone who is interested in stop motion but maybe doesn’t want to go through the process of learning how to build their own custom armature?

You can do stop motion at any time. You can start anytime. There’s this super handy app, iMotion. That’s not how I started, but I when I was trying to get back into it I used that. It’s a free app and you can just do stop motion with whatever you have.

You have a workshop coming up!

Friday May 24th at 3:00pm and 6:00pm. Each session is two hours long and people have the chance to animate with these armatures. We’ll do a wire armature building activity. I’m having a couple other stop motion animators show up. We’ll talk about their work. Then I’ll talk about the process that happened during my grant project. I’ll have my tools with me too.

Editor’s Note: Sign up for Adam Loomis’s Stop Motion Workshop here. Pricing is based on a sliding scale from $10 – $30.

Can you tell us a little more about the grant; does it have a time limit on it?

Yeah. Typically it’s a year, but I got an extension to the end of June this year. Actually, right after I applied for the grant, I got hired at the Minneapolis St. Paul International Film Festival as a shorts programmer. Two months before the festival in 2018, I found out that I got the grant and I was like, “Oh crap. I have to do both?!” I ended up leaving the film festival in November to work on this project full time. All that said, it’s easy working with the Minnesota State Arts Board. They were very amenable to my situation—they want the artists to succeed.

Do you have to turn in receipts to show that you’re for sure paying for materials? Can you live off of that too?

When I applied, I proposed a budget. I have to stay as close to that budget as I can and I have to track all my relevant expenses to report on at the end of the grant period. When I made the decision to switch from buying a drill press to buying machine tools, that was a major expense shift. My grant officer said if you don’t change your budget more than 10 percent, then you don’t need to ask for permission to do that. And yes, about one-third of my budget was a stipend to myself that went towards living expenses.

But That didn’t stop you.

No it didn’t stop me, but that’s just what I’ve always wanted. I’ve never seen myself as a freelancer or a designer. I’ve worked in museums and customer service jobs while I’ve been doing all of this. And it wasn’t until last year that I started working a “big boy” job. Arts administration and arts facilitation is where I’ve kind of made my bread in the past few years and I’ve just worked on my own projects on the side.

Do you have a resource for grants or did you find this one specifically and did you write your grant proposal to target this one?

It was very much targeted at this one grant. Finding other grants is always a challenge. I’ve learned to keep my eye out for certain ones in certain places, but this was the one that I felt most confident that I would be able to get. So I concentrated most of my effort on this one. Since I got it, I’ve fallen out of the loop a little bit in terms of sustaining grant income. It’s not reliable, but when you get it it’s really helpful.