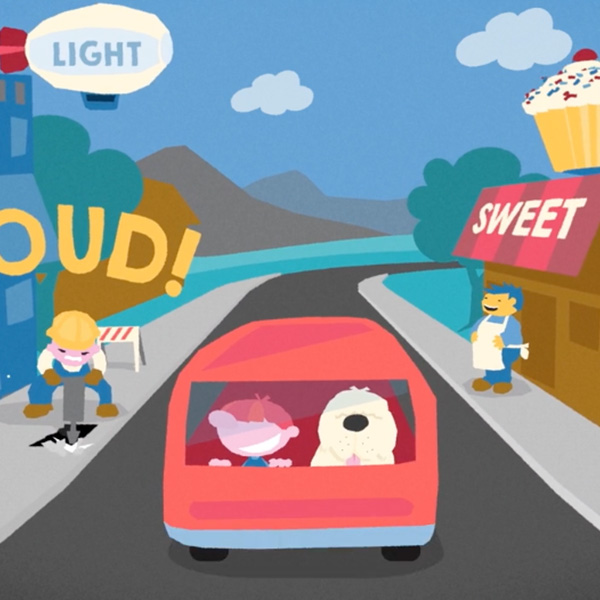 Eric Kreidler of eg design breaks down their latest music video for educational band, The Bazillions, and teaches us a new word in the process!

In 2009, I felt like I was living with my nose buried in a giant book about ActionScript coding. Not fun. Not for me, anyway.

Then along comes They Might Be Giants’ wonderful children’s DVDs (Here comes the ABCs, 123s, Science) and a little research showed that these videos were being produced by very small studios. I had loved film and animation since I was a kid (um…Star Wars) and small teams were doing design-driven character animation in After Effects. The lightbulb began to flicker.

Then, my very talented singer-songwriter friends Adam and Kristin Marshall launched a side project from their grown-up rock band (The Humbugs) and created an album of children’s music as their alter-ego, The Bazillions. The lightbulb was now burning full blast.

“Wide Open World of Adjectives” is our 15th animated music video for The Bazillions, and it lives on a YouTube channel rapidly heading towards 8 million views. Every day, kids from all over the world will comment on these videos, saying how a video helped them pass their test or that their whole class sings along. It feels good to work on these videos—which helps to offset the many, many nights and weekends it takes to create them.

I’ve also (for better or worse) chosen to treat each video as an R&D opportunity for eg design (our main business, now focused exclusively on motion graphics and animation.) Like many of you, I often find myself perusing Motionographer or Vimeo thinking “How’d they do that?” or “I’d like to try that.” The Bazillions has given us that opportunity. “Adjectives” is really one of the simpler ones we’ve done, with “Counting On a Friend” (full-on stop motion production…in our basement!) and “Water Cycle” (simulated watercolor animation) being our most ambitious to date.

But every project has its own interesting wrinkles. We tend to develop a look and feel and then figure out how to animate it afterwards. “Adjectives” began as a series of rough pencil sketches that we cleaned up in Photoshop.

It feels good to work on these videos—which helps to offset the many, many nights and weekends it takes to create them. 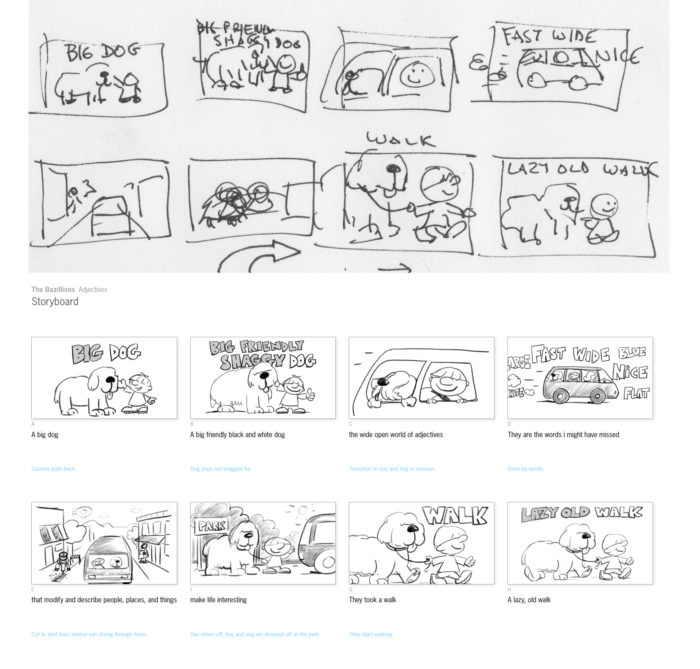 In this form, the whole thing has a bit of a Schoolhouse Rock feel. For those of us of a certain vintage, it’s impossible to play in this arena of educational videos without thinking about Schoolhouse Rock. The loosely coherent look and feel of The Bazillions’ materials has developed organically, but it does center around ideas of construction paper cutouts, kid art, etc. Thus we’ve never used characters or artwork with black outlines, white backgrounds, and the other trademarks of Schoolhouse Rock’s cel animation. Also, while I love-love-love exploring frame-by-frame animation on my glorious Cintiq 27 (it’s so liberating to be free of character rigs), we are far from efficient in the cel department at this point. It was clear that a more typical AE-based production was the way to go for “Adjectives.”

We tend to develop a look and feel and then figure out how to animate it afterwards.

So, the next step was translating the black and white sketches into flat color artwork. Adam and Kristin suggested the cool idea that the world turns from black and white to color as the song lyrics layer in the adjectives. Black and white seemed a little drab, so we went with a blue-gray duotone look for pre-adjectives, and full color for post-adjectives. 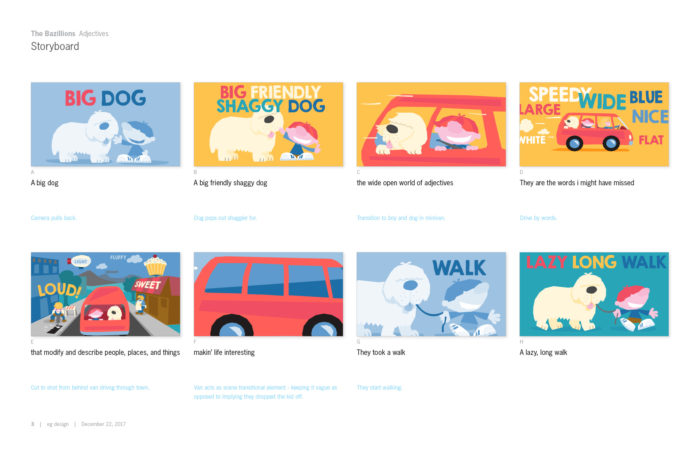 The color palette came from the latest album cover design, that we created with Adam and Kristin last summer. And certain elements of that album cover came from our 2014 video for “Prefix and Suffix.” Some would call that branding.

I wanted to get a little frame-by-frame into the piece, plus preserve a little bit of the feel of the original sketches, so I added a white hand-drawn accent layer just to give it a little warmth. Both Gretchen and I are far faster creating artwork in Illustrator as opposed to Photoshop, and I find we often run out of time when it comes to adding texture, etc.

As with all projects, nothing gets things moving like a deadline, and when the idea was floated in early January to launch the video in conjunction with The Bazillions’ February 17th show at Symphony Space in NYC, I naturally agreed. I looked at the calendar, ballparked the hours, counted the weekends, and said no problem!

I have been called a tidsoptimist. But I don’t miss deadlines! ☺ 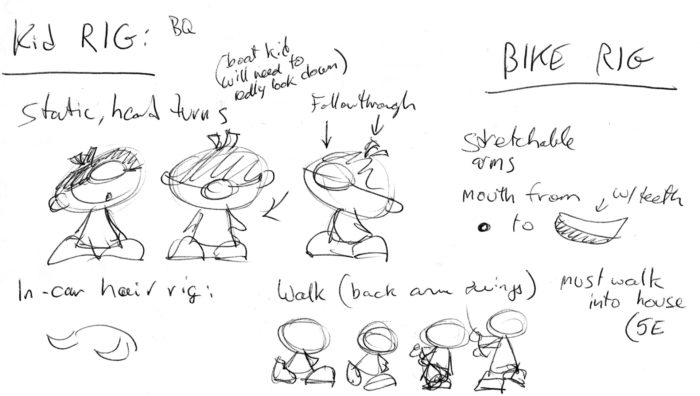 While it was whipped together fairly quickly, I did like the main character design, and there were aspects of the Illustrator art that I was determined to get into the character rig/animation. The main kid and dog are interesting as neither has eyes—well, their eyes are covered by their hair/fur—so it was fun trying to get life into them without blinks, etc. The kid has lots of little bits of hair that I wanted to get to move. He’s just kinda wacky, with huge feet, head like a PokeBall, and I wanted to hit certain poses and really be able to turn his head. In another life, it’d be very fun to animate him frame by frame. I like the shapes.

But, in the end he was animated with a few different AE rigs, using a combination of Joysticks ‘n Sliders, BQ_HeadRig, DuIK, AND a healthy use of CC2018’s new points-to-nulls feature. Many of his shapes (body, arms) are animated through shape layer points attached to nulls, some of them IK’d with DuIK.

The biker rig is a more typical DuIK rig. And there’s rubberhose on his legs. For a simple little guy, he pretty much had every rigging script I have thrown at him.

Joysticks ‘n Sliders in CC2018 is pretty cool, as it allows a shape layer to morph in real time between 5 different shapes. And when I say real time, I mean slooooowly in real time. It renders quickly enough but the live preview was pretty chunky. I used this for his hair, and I’d often turn this layer off for easier animating.

As with all projects, nothing gets things moving like a deadline…

I did a few rough passes in Flash for some of the kid’s animation, just to not get too locked in by what was always going to be a rig full of compromises. There’s always those moments with AE rigs where you hit things like, “how am I going to flip his hand around to grab the paper?” It ultimately took a series of drawings to make that little detail happen.

AE rigs can do a lot, but they can’t do everything. Sometimes you just have to animate frame-by-frame.

There’s a few little bits of 3d in there—the dictionary at the beginning, and the cupcake on top of the bakery in the town.

Eventually things were coming together, and it was time to add the hand-drawn accents. As usual, there’s always hidden challenges.

A judicious use of rotoscoping added a unique look to the water’s surface.

I really liked this frame of the “clear blue lake” and I wanted these squiggly reflection lines on the lake surface—but the shot contained a 3D camera move, pulling back from the boat. So, to get the reflection lines properly tracked, I made my original reflections a 3D layer in AE, then rotoscoped those lines in Flash. It’s such a quick shot, but I think it looks cool.

A few other production notes:

Well, we made our deadline. And, of course, it turned out it was too expensive to rent out the projector at the venue in NYC. Oh well. “Adjectives” is live on YouTube, busily teaching kids around the globe as we speak. As with any project, there’s always things you’d tweak, details you’d finesse, but all in all it’s a nice addition to The Bazillions’ catalog.

Our goal with The Bazillions videos has always been to offset, in some small way, the oceans of garbage that are out there for kids, and to pay homage to the fantastic Schoolhouse Rock, Sesame Street, and Electric Company animation that…those of us of a certain vintage remember from our childhoods. And I would be totally remiss without a major tip of the cap to Adam, Kristin, and all of The Bazillions—none of these videos would exist without their incredible music, now spanning four award-winning albums. If you have young kids, or heck if you like good music, go out and catch a show!

Eric Kreidler is one half of the animation studio eg design based in Minneapolis.
If you have a question for him, drop him an email: eg@eee-gee.com